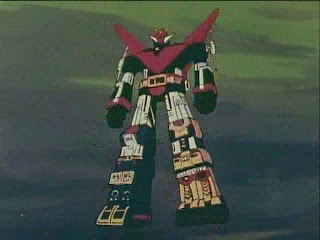 With many famous veterans of the robot genre at the helm a new super robot show aired in 1980 which was Uchuu Taitei (Space Emperor) God Sigma that aired for 50 episodes.
In the year 2050 AD humans have advanced in their exploration of space and now have colonies as far away as Jupiter with unmanned probes going out as far as 20 light years. Unknown aliens known as Elder arrive in the solar system and take over Jupiter’s moon of Io which was used as a colony by the Earth and use it as their base. Elder’s objective is Trinity Energy which has been developed on the Earth by Professor Kazumi and is located in Trinity City. To the defense of Trinity City is God Sigma a super robot powered by Trinity Energy. 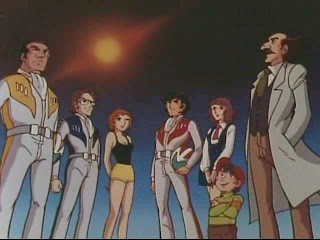 The first episode introduces the majority of the characters which include Dan Toshiya who had just arrived on Earth to see Trinity Energy and pilots Kuariou, Juri Noguchi who was working as Professor Kazumi’s assistant and helped to build God Sigma who pilots Kaimeiou, and Kira Kiraken who escaped from Io shortly after Elder’s attack and pilots Rikushinou. Others include Professor Kazumi who created Trinity Energy and is in charge of Trinity City, Kasuga Rie who is Kazumi’s secretary, her brother Shouta who is a technical genius of sorts. There are also a few other minor characters including Marino who is the sponsor of Trinity City, his daughter Minako who is in love with Toshiya and Sachi who also escaped from Io and is Shouta’s girlfriend.
God Sigma is formed by the combination of the robots Kuraiou, Kaimeiou and Rikushinou in combination with the Big Wing. As with a lot of super robot shows the amount of screen time with the three robots are disproportional to that of God Sigma. As expected they are good at fighting fighters but anything else just gets them beaten over and over. God Sigma’s main weapon which kills pretty much everything is the Musou Ken, a sword. God Sigma fights against the Elder’s Cosmosaurs, just your generic enemy mecha/monster. One of the highlights of God Sigma’s is when the new more powerful Cosmosaurs arrive and God Sigma’s Musou Ken is defeated. God Sigma wins by shoving the broken Musou Ken down the throat of the Cosmosaurs which then gets struck by lighting; it was just a pure awesome scene. At the halfway point God Sigma is upgraded with the Sigma Breast which allows the Musou Ken to defeat the new more powerful Cosmosauruses. 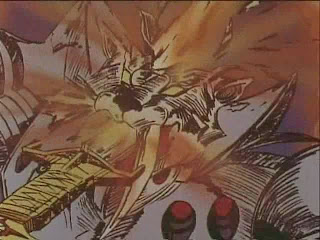 All that remains of one of the most epic battles

The enemies of the show are rather an interesting bunch as we find out they aren’t from the year 2050 AD but came from the future of 2300 AD. It turns out that in the future the Earth has formed a Space Federation and decides to attack the Planet Elder which was a planet of love. While Trinity Energy is an effective power source it’s has great destructive powers as a weapon and is even able to punch through barriers. This is giving the Space Federation a one-sided victory over the Elder. The initial Elder group is lead by Teral who has the biggest role out of any Elder it turns out that Teral is actually a combination of two people the great Elder hero Teral and his girlfriend Lelah. The great hero was killed while trying to save Lelah and thus the Elder had some weird tech that combined Lelah and Teral into one person. With this combination I’m actually not sure if Teral is supposed to be a man or woman at this point in time, but it seems like Teral just now looks more like a girl and has Lelah’s memories. Teral has two subordinates which are Ritsu who generally commands the Cosmosaurs, and Jira who makes the Cosmosaurs and also commands them as expected Jira and Ritsu do not get along. Eventually a second group arrives and takes command which includes Gagan the new commander, Dalton the battle leader, and Mesa the scientific and technology lead. This new group while definitely far cruller and views the Earthlings as bugs initially seems smarter like laughing at Teral’s stupid idea of taking hostages. However their smarts fade quickly as it doesn’t take long for them to start falling into the same pattern of Teral’s group. As expected Gagan was a total jerk of Teral insulting him/her for his/her failures at getting Trinity Energy of course it lead to his own failures and I was just waiting for Teral to laugh at his face for it, sadly no luck there. 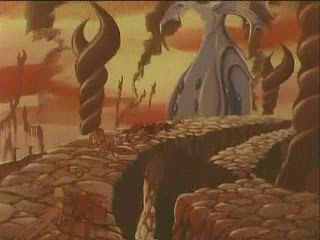 Elder what was once a planet of love and peace is a
planet of death thanks to the Earth in 2300 AD.
The first half of the series is to be expected we get to learn more about the characters and the show and it starts the rivalry between Teral and Toshiya. Trinity City is constantly attacked and rebuilt. Shouta shows his genius and devises a few ways to trick Elder and well the Elder just fail time and time again. A small hint is dropped to the Trinity City crew however with a picture of a star 300 years in the future.
With the arrival of the new villains and the halfway point the series starts to pick up. We learn that there are survivors on Io, Trinity City gets upgraded into Trinity Base which launches into space and heads for Io. The arrival or Gagan’s team brought lots of friction between Teral’s team this leads to the death of Jira and Ritsu and Teral turns on Gagan and works with Toshiya and the survivors of Io and eventually kills Dalton and Mesa. Teral also lets the Trinity Base crew know that they are from the future, which has Toshiya vow to save Elder from the future with Trinity Energy after all problems are solved.
Going into space also causes a drastic character shift between the fun loving professor: Kazumi. Kazumi was your standard super robot professor prior to this, however he turns into a jerk and it’s revealed he’s been capturing soldiers from Elder and trying to find out to get into the future. Once Trinity Base is in space he’s totally against it and wants them to return back to the Earth and even goes far enough to say God Sigma can’t hope to win. This all comes to an end when God Sigma is supposedly defeated and falls into Jupiter, he forcefully attempts to surrender Trinity Base but instead escapes to Gagan. Now at this point in all rights the series should be over and the Elder should have won. They have been aiming for Trinity Energy since episode 1 and they have the creator of Trinity Energy who is more then happy to give all the secrets of Trinity Energy and go into the future. But no this is the very height of villain idiocy, Gagan instead sends Kazumi back to capture the base by himself and one of his own soldiers end up shooting Kazumi in the end too. Now Gagan had already been stupid by this point taking hostages and even having a lot of plans to straight up destroy Trinity Base.
God Sigma reaches it’s climax as Trinity Base finally reaches Io, it turned out the enemy actually run out of Cosmosaurses as well by this point. With Teral and Toshiya’s dad leading the charge on the surface and Trinity Base’s arrival all that’s left is the final confortation and to the shock of everyone Gagan’s base is actually a giant robot named Gargos! Now God Sigma isn’t a tiny robot and it’s actually 66 meters tall, Gargos just dwarfs God Sigma and has to be at least 300 meters tall. This ends in a two episode fight where God Sigma finds that all it’s weapons are worthless even the Musou Ken just breaks in Gargos which forces God Sigma to use a new attack called Trinity Wing, while this does defeat Gargos God Sigma itself is destroyed in the process. The remainder of the series is Teral’s death at the hands of Gagan and Toshiya killing Gagan. Unlike a lot of robot series God Sigma does get a decent ending. Following the defeat of Gagan we see that the colony on Io has been rebuilt and the Trinity Base crew are helping the rebuilding; Toshiya takes a rebuilt God Sigma and using the time machine heads to the future to save Io.
God Sigma was a pretty good series overall and an improvement over a lot of the earlier 1970s series. The battle between Gargos at the end of the series, and the battle prior to God Sigma’s gaining of the Sigma Breast attack, where the Musou Ken was defeated, were a thing of beauty. We see a lot of your standard super robot clichés in here such as the combining robot, and the new energy source. Kazumi turning on the Trinity Base crew was something new to the genre as far as I know at this point and still remains pretty rare, the only other instance that comes to mind is Professor Saotome in Shin Getter Robo: The World’s Final Day but that was quite different. Kazumi turned into a mad man obsessed with his own science and thought he was the world’s great scientist however this was too sudden and just lead to his death in the exact same episode. His shift even made him designed to look slightly more evil. But with this only lasting with joining Elder for a single episode it makes the whole endeavor kind of pointless. The revelation that various people on Io were still alive made me groan because I was expecting a flawless victory with everyone’s family alive even Kiraken’s who we saw blow up. Luckily this was not the case, Kiraken’s family really was dead, Juri’s sister lived and escaped to the Earth only to die since she got shot, Toshiya’s dad lived till the final episode but got the oh so fatal shoulder shot and died from his injuries. 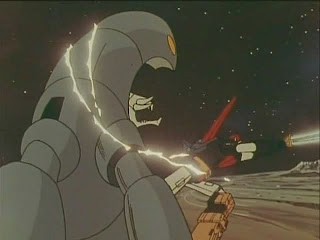 God Sigma's Musou Ken in action against a Cosmosaurs

Trinity City kind of reminded me of Macross City from Super Dimensional Fortress Macross that would air in two years. The city just existed to be attacked over and over again so it was nice to see the damage build up to a point where they had to take the entire Trinity City and move it to a dock to be repaired. The reborn Trinity Base was nice as it removed worthless city and in it’s new location on the Earth surrounded by rocks even got the standard super robot barrier! Of course this was short lived as shortly after Trinity Base was revealed to be a ship and left for space. Going to space kind of bothered me honestly only because it took 11 episodes for Trinity Base to go from the Earth to Jupiter and now normally this was seen happening in the span of 10 seconds. It was just added filler for no good reason. It’s to be expected and all but still it’s not nice to see. Seeing the Elder as enemies from the future where it turns out the Earth were the bad guys was definitely something different and something we haven’t seen before and I liked to see the change. However I felt like we were straight up told this too quickly with Teral’s back story in episode 16, while it took Trinity Base crew until 37 to learn of this. The various shots of the future did however continue to show just how cruel the Earth had became with the massacring of civilians. 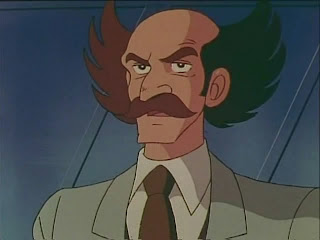 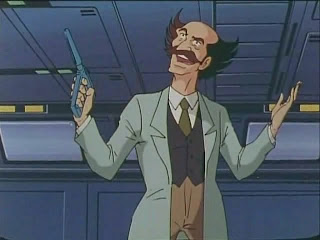