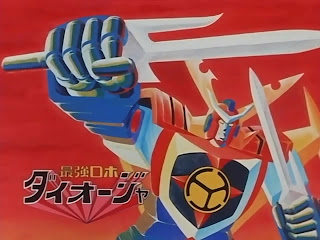 Ultimate Robo (Saikyo Robo) Daiohja (最強ロボ ダイオージャ) was a Sunrise robot series from 1981. The Japanese Wikipedia says that this show was created as a kind of transition show easing fans into more real robot oriented shows. Because of this Daiohja has elements from both shows in place. Basically the robot designs of the enemies are more realistic and they’re fighting human controlled robots so you got the more human aspect, however Daiohja itself is a super robot. 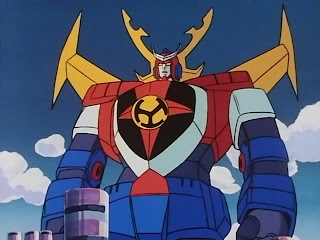 The title robot Daiohja in all it's glory

The story of Daiohja is based on a very popular old long running Japanese drama known as Mito Komon which has been running since 1969. In Mito Komon the main character is much older and there are no robots and the show takes place in Feudal Japan but the concept is the same even the names of Suke-san and Kaku-san are taken from Mito Komon.

In the interstellar kingdom known as Edon the 16 year old prince Edward Mito heads on a trip with his two retainers as a coming of age journey of sort to view the kingdom that he will one day rule. The kingdom is a dangerous place filled with criminal and unjust rulers so Mito has brought his combining robot Daiohja. 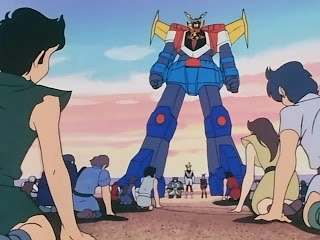 All bow before Mito and Daiohja

Daiohja starts off with Mito and his retainers Suke-san and Kaku-san leaving for their trip to visit the various planets in the kingdom. Since this trip is done incognito generally no one is supposed to know who they are. We are quickly introduced to most of the small cast in the first episode. Edward Mito is the prince of Edon he has a very playful attitude and doesn’t like being stuck in the castle being all proper, but when the time comes he will be serious, when he needs to give a name on the planet he is called Miito. Duke Sukedo is one of Mito’s retainers and is usually referred to as Suke-san he usually takes a more strict approach and wants Mito to study on his journey like he’s supposed to do. Baron Kaksu is Mito’s second retainer he loves food and is more light headed then Suke-san, he is usually referred to as just Kaku-san. Flora Shinobu is a ninja who has joined up with Mito, Suke-san and Kaku-san her role is generally sneaking around and finding out what is up with the planet she secretly deeply cares for Mito. Barujan is the chief retainer of the Edon Empire he usually runs around yelling loudly for the prince, he’s basically a stick in the mud and provides comic relief at times too he appears in the first episode but then disappears for the next 15. Jinai is Barujan’s assistant and is just comic relief, he’s less serious then Barujan and gets on his nerves a lot. 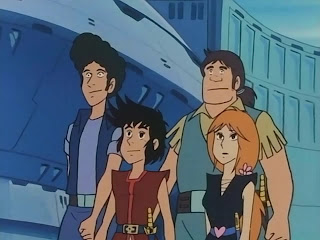 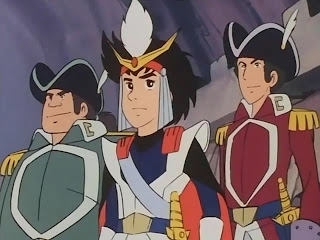 Daiohja doesn’t really have a lot in terms of plot. The show is very episodic in nature and there is no all encompassing villain who everyone is working under. In the end every planet just has a jerk in some sort of position in power that needs to be shown their place, which is generally their own grave.
Daiohja the robot is a three-part combining robot which is made up of Ace-Reder piloted by Mito and is armed with Ace Saber, Aoider which is piloted by Suke-san and mainly uses a Beam Gun and Cobalter which is piloted by Kaku-san and uses the Hammer Chain. The Hammer Chain is really an awesome original weapon which can be used as a mace on one end and the other end shoots out spikes attached chains. 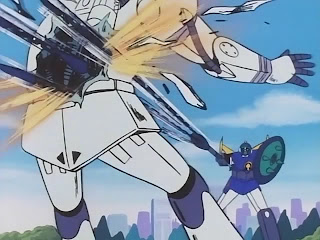 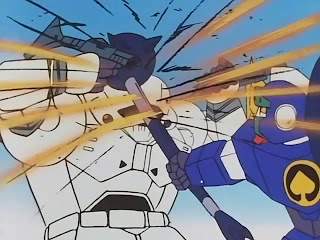 The robots are summoned by yelling “Cross Sword” and doing so and shouting out “Cross Triangle” causes the combination into Daiohja. Daiohja’s main weapon is the Raimei Ken (Thunder Sword) and it’s attack the Denkou Raimei Kuzushi (Thunder and Lightning Destruction or something), the only other attack worth mentioning is the Beam Bowgun, it’s a bow that shoots out a beam arrow. Daiohja actually has quite a few other attacks as well but it’s worth noting that the eyecatch of the show shows the Grapper (see the top picture) which never appeared once in the show another a commonly listed attack is also the never seen Rocket Punch. Partway through the show Ace-Reder, Cobalter and Aoider do get an upgrade from a crazy professor which basically allows them to fly and has extras guns but while they always launch with these parts they are rarely used. These parts disengage when it’s time to combine into Daiohja and can form Shinobu’s rarely used Crossaider. 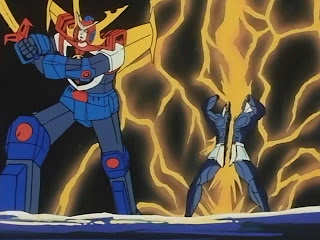 Daiohja follows a very simplistic formula for almost the entire show this involves Mito arriving on some planet running into someone which leads to finding out about some problem on the planet, Shinobu uses her ninja powers to investigate, Suke-san and Kaku-san reveal to the villain of the episode that the kid is Prince Mito, no one believes it, Daiohja comes out, everyone bows cause it’s Daiohja the villain realizes he has no choice and fights to the death. With the appearance of Barujan and Jinai added is run away from them and avoid them. There are a few variations in this formula which includes the random person who knows who Mito is and wants him dead, or Mito sparing the life of the villain generally through another begging for their life. 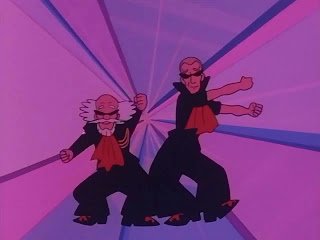 Barujan and Jinrai randomly dress up and dance for no explained reason at all
but they are comic relief so it's all right. 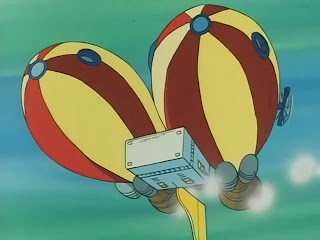 The planets vary quite significantly throughout the kingdom, one planet will be highly technologically advanced while the next planet will have people living in huts without electricity. Planets are usually filled with weird animals of sort which are generally some combination of normal animals and some weird one like the random cactus creature. 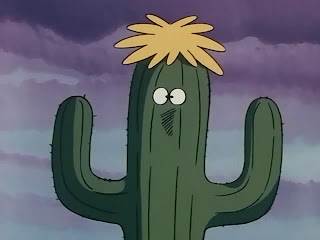 
While the show is quite episodic in nature the show does have a conclusion in the end, while the villain isn’t anything great and to write home about the journey completes itself back on planet Edon where the show started. Mito is actually given the opportunity to become king from all he’s learned from his adventure. Mito rejects this offer at the moment and takes off on another journey. 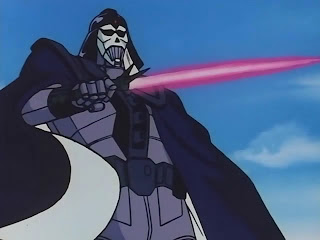 Without knowing a lot about Daiohja I found myself liking this show a lot. At the first episode I was worried we’d see another Daltanious with a prince who doesn’t want to be a prince (they’re voiced by the same guy even!) but that wasn’t the case as I enjoyed a lot seeing Mito become serious on the enemies, it was almost like he had a split personality! Since this show has a very episodic nature a lot of the liking of the show will hinge on if you like the characters or not. A lot of the plots in the episodes were weird some highlights include the movie director who wanted realism so was killing people in the movies, the jungle safari where the poor people became entertainment for the rich, the factory that separated the building section of slackers into the air and blew them up, the planet where the ruler turned people into dominos for entertainment, the planet where only the ruler was allowed to have ceramics, and the planet where people became part of the art for the ruler. A weird thing to note about this show is the unusually high number of two part episodes which makes up for a total of 8 out of 50 episodes. 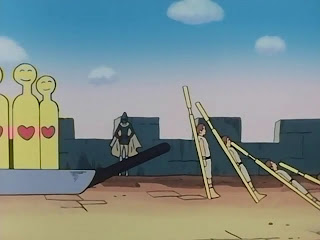 On the planet Dorimu people were strapped to boards and used as dominoes
for the ruler's enjoyment until Mito put an end to that
Posted by Mark064 at 01:48